As you may recall, Newquay Marine Group and Newquay Beach Care commissioned Sue Foster to create our logo using marine debris she found on the beach. Sue kept a diary of all the beach cleans she did and everything that she found and collected. Following on from the first instalment, here is Part 2, the final blog, with photos of the amazing finished masterpiece.

From the 12th October 2016 to 28th July 2017, Sue has managed a grand total of 89 beach cleans!! The majority of these were at Harbour Beach, but she also visited the beaches of Towan, Great Western and Fistral. 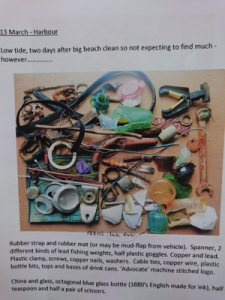 Sue has encountered a lot of microplastics and nurdles during the beach cleans. Nurdles are small plastic pellets about the same size of a lentil. They are the base products that plastics are made from. Countless billions are used each year but many end up washing up on our shores. 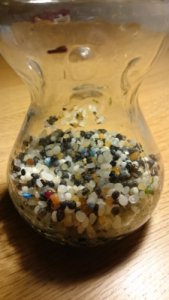 Sue reported some of her nurdle findings to ‘The Winter Nurdle Hunt’ along with the date, location and number she found www.nurdlehunt.org.uk

There has been some highs and lows again for Sue. The amount of plastic pollution really saddened her at times. She had storm Doris to contend with in February and also a bout of flu! Her highs included witnessing the filming of a new Mitsubishi launch, making the first footprints in the sand sometimes, and joining in with a Newquay Beach Care beach clean!

Some interesting finds Sue discovered were:

Lots of ‘By The Wind Sailor’ jelly fish

A pink sea fan (type of coral) caught in netting

A persons CV in a bottle!

A ball of wool (which Sue dried out, used, and crocheted more sea based creations)! 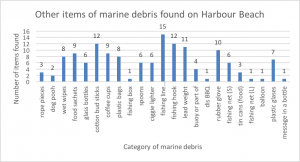 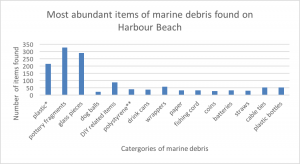 We had the great unveiling of Sue’s work at our NMG meeting in August. We were all really impressed. Sue has definitely exceeded her brief and all of our expectations, creating something truly inspiring. NMG will use this unique creation as an educational tool and talking point to raise awareness of marine debris. We have also collated her data from Harbour Beach to analyse what items were found more frequently to help us with our cleaning efforts (this will be available on our website www.newqauymarinegroup.com). 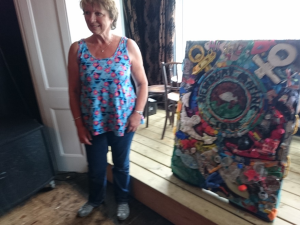 Sue has also created a second piece of artwork that no one has seen at present which we will unveil at The Newquay Fish Festival on 9th September. Hope to see some of you there! 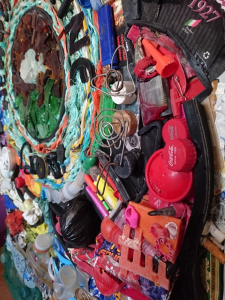 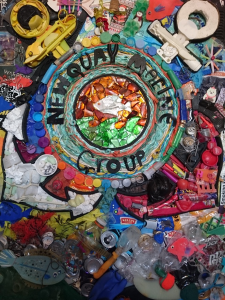