In October 2016 Sue Foster was commissioned by Newquay Marine Group and Newquay Beach Care to work on a piece of artwork using marine debris. The group felt this would be an effective, visual way to raise awareness of marine debris and the profile of the group. 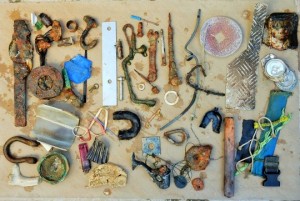 As part of this project Sue was asked to keep a diary, which could be turned into a blog. So – welcome to the first instalment! 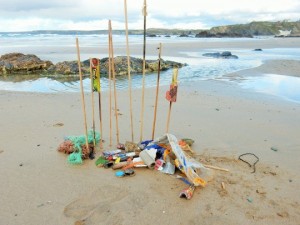 Sue has been beachcombing in all weather for years. She has concentrated on: Fistral Beach, Little Fistral, Towan, Great Western Beach and the Harbour.She has shown massive commitment to this project, so far completing 35 collection trips!

Sue’s found a huge variety of flotsam and jetsam, old familiars we often find on our monthly beach cleans and some more unusual finds.A example of her finds can be found at the end of this blog.

Sue has collected such a variety of items that we cannot imagine which ones she will chose for the picture and how they will all fit together and work. It’s very exciting – we cant wait to see the finished product!

There have been some highs and lows. Sue has witnessed the Cribbar during the winter as well a high tide of plastic washing ‘in to every rock and crevice below the Headland Hotel’

On another occasion, Sue described the micro-plastic in the rockpools as ‘minestrone soup’. A sad sight indeed.

Locals have contacted Sue as a expert if they find anything interesting. Sheila Harper, a local geology and archaeology expert at the Newquay Museum have identified some of her finds including some Victorian conserve jars and clay pipe pottery pieces. Sheila also found some fishing weights made from local sand.

Sue also researches some of the items’ she has found. A plastic ball she picked up proved to be more than just a ball. These balls were used as a flexible cover for drinking supplies. Apparently the balls disguise water to prevent contamination by wildfowl. They also prevent algal build up and evaporation. Never knew this – did you?

Newquay Marine Group have been utterly impressed with Sue’s diary. Look out for the next instalment and the great unveiling of the art work at the Fish Festival 2017!!